Day 1 -The competitors woke to torrential rain and breeze, not as much as forecast but enough to make it interesting. PRO Jason Riby explained that due to the sea conditions he would be unable to send us out across the bar but could set a compact course inside the piers with the hope of getting outside as the tide dropped. After a brief fleet discussion, it was decided that although not ideal and with the forecast for tomorrow not looking good we would go for it.
Conditions were varied with the sea state to one side of the channel challenging and the other side whilst flatter the wind was more unstable. The first race got underway at the first time of asking (duly repeated for the remainder of the weekend, what a good bunch we are)?! The pin end was the place to be, those that got out on port, hooked into a persistent lift that along with the tide took us up to the mark, Paul Davis (Lymington Town SC) made the initial running until he ran out of the lift which took Tyler Harmsworth (Shoreham SC) above and around the windward mark first with local guest sailor Kieran Graham (South Shields SC) on his transom, kites up and hold on while piling through a large section of the fleet who had over stood, Kieran kept the pressure on over the next couple of laps before, guess who but Giles “Houdini” Chipperfield (Lymington Town SC) carried out his a usual Houdini act and arrived on Kieran’s transom by the second leeward mark, their battle allowed Tyler to maintain his lead until Giles slipped past and gave chase, To Tyler’s relief the shortened course flag was raised and one final covering gybe got him across barely a boat length ahead of Giles with Kieran completing the podium.
Anchors up and PRO Jason lead us out across the bar to set up, outside, this was an eye opener for much of the fleet who had never had the experience of a 3-meter swell before. The wind had been due to soften which it duly did but unfortunately it kept dropping until we were left becalmed. The phrase “who would want to be a race officer” was never more appropriate because no matter what Jason did the next rain cloud or sunny spell changed the wind speed and direction, after an hour and a half he took pity on us and sent us all back to the shore. Trying to get through the entrance with wind was fun but could be classed as character building trying to get through with no wind. With the boats tucked up, the sailors showered there were a few whispers aimed at the sky above for the sun to come out (I’m sure there were a few nods of appreciation for their safe return). Well the sun did arrive as requested and an absolutely fabulous BBQ got underway. 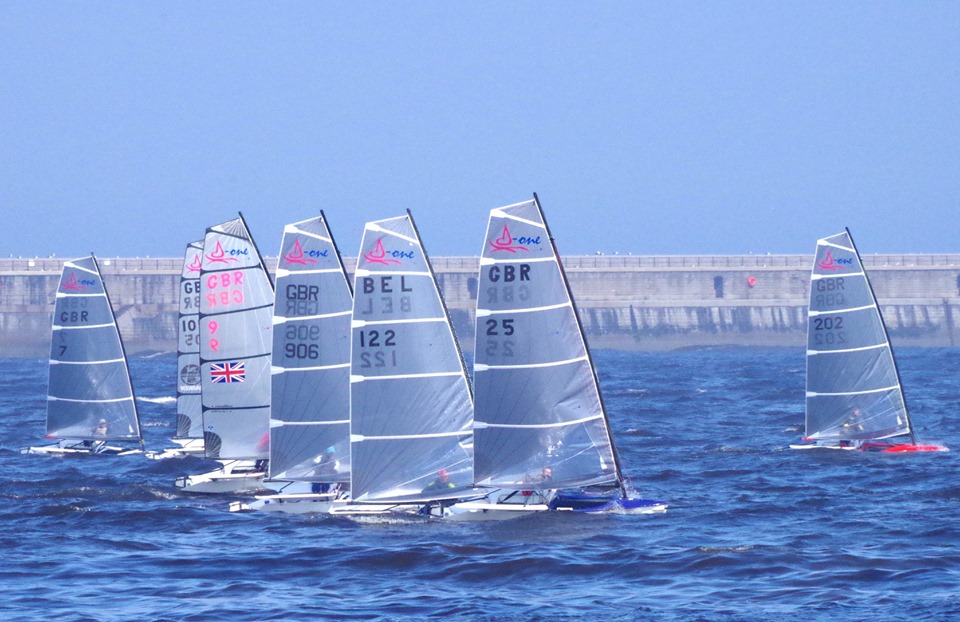 Day 2: No time for messing about today, get outside and hold on, the fleet took the race team by surprise by arriving in the race area 45 minutes early! No surprises really given the sea conditions and increasing breeze, just what everyone wanted (not)! Some of the fleet decided that the club house was the best place to be and returned to shore. Race 2 the first start was postponed with 30 seconds to go due to a large shift. The mark having been re-laid we were off in what has to be a most memorable sail. Rob Jones (Warsash SC) rounded first with James Nield (Coniston Water SC) closely following and Tyler in third, kites up, Oh dear lord this is full on. Kieran joined the party by sailing lower than the rest, all apart from Terry Brooks (Oxford SC) after employing his former RS300 technique and left the kite safely tucked away, a ploy that looked to be working well until the single sail gybe went a bit Pete Tong, at the bottom Kieran had taken the lead with the other three holding station. Kieran and Tyler (one young and fit and the other heavy) put the afterburners on upwind and opened a gap on their pursuers. The wind by this time was reaching ‘what are we doing out here’ levels, Kerian took a swim during the hoist which left Tyler to disappear down the course at a great rate of knots revelling in the conditions, that was until the drop, where he took a pit stop, on righting he still had a decent lead as there had been complete carnage at the bear away but without a functioning mainsheet. Someone else who had employed the Brooks approach was Nick Favell (Great Yarmouth & Gorleston SC), sailing his D-One like his Phantom and taking the lead which he held to the finish just in front of a hard charging (you guessed it) Houdini Chipperfield (how does someone that small, go that quick in survival conditions)? Next out of amen corner was James. Only 8 boats made it across the line, a fantastic effort from them and the rest of the fleet who all made it ashore under their own steam. The PRO decided enough was enough and called it a day. A small number of the fleet decided to take advantage of this opportunity by visiting some local historical sites followed by afternoon tea. The evening ended with an amazing feast of homemade Indian delights, a few beers, many stories and a whole host of laughter. The quote of the evening goes to Rob “the plod” Jones for his woeful tale of how much he had hurt his little pinky whilst holding the mainsheet. It hurt a lot, apparently!

Day 3: PRO Jason was going for 4 races in conditions that first appeared conducive to this plan.

Race 3 Another clear start and out of the left came the ‘bang a corner Belgium’ Howard Fairbrother (Queen Mary SC) who despite close attention from a number of the fleet including Tim “no clothes” Garvin (Queen Mary SC) and Terry Brookes held the lead to the end, Kieran went missing in action up the first beat, taking a dip to cool off as it turned out. As the race progressed it was all about finding the pressure lines downwind, surprise, surprise Giles wriggled and writhed his way through to 2nd followed by that man Favell again, holding off Tyler, biggest loser was Mr Garvin who dropped behind Terry for 6th.

Race 4, the rain starts again, Kieran suitably refreshed is quick off the line and leads at the first mark which despite the wind dropping and swinging maintained this lead to the end, James made a welcome return to the front and kept Kieran honest, the flying Belgium showed his lighter wind form to claim third, where was the series leader? Well there were a number who got caught out by the wind shift and the tide, Giles was one of these along with Tim. So that’s 4 races with 4 different winners.

Race 5, the wind swung around to the North and dropped meaning only marginal hiking for some, Tyler and Giles made the best of the start with Paul Davis making a move a third of the way up the beat. At the first windward mark Giles rounded first and started to sail away from a bunch which included Terry Brookes, Tim and Kieran, the wind continued to swing and drop and thankfully the PRO shortened the race after 2 laps to reset the course (again, I would not have wanted to be a mark layer this weekend). So 5 races and now 5 race winners and with Kieran claiming 2nd from Paul the stage was set for a final race showdown between Giles and Kieran.

Race 6. The fun and games started pre start with Kieran putting the squeeze on Giles. However, the conditions being favourable for Giles in which he managed to outpace Kieran upwind. Paul Davis played a blinder and lead comfortably at the windward mark followed by Tim and then the gaggle containing James Neil and Rob ‘Pinky’ Jones with Tyler lurking (as he often does). The next couple of laps bought about a real tack fest upwind, great to watch but not be involved in, Paul was keeping his cool, Giles was on the move, Tim was trying his best to hang on to Paul but got on the wrong side of a shift only to fall behind both Giles and Kieran, Biggest gainer from this shift and not getting involved in the tacking duels was Tyler who managed to leapfrog both James and Pinky, The last downwind saw Giles comfortably maintain his lead to take the only double race win and the championship, Paul 2nd, Kieran 3rd and Tim 4th. There was interesting action further down the fleet with Pinky attacking Tyler all the way down the run but unable to claim mark room and a last ditch gybe for the line failed to pass Tyler, a result with James coming in 7th although we didn’t know it at the time would be significant in the overalls.
A fantastic Championship event duly completed at South Shields Sailing Club. A club that is solely run by volunteers. The D-One fleet want to say a massive thank you to each and every volunteer that took the time and effort to make this event a success. Your enthusiasm was in abundance and your commitment shone through. We will return.

The prizes were supported by Rooster and presented by the Mayor and Mayoress of South Tyneside with Giles Chipperfield being crowned D-One National Champion.

Next stop for the D-One travelling circus is the Europeans on Lake Biel, Switzerland in September.