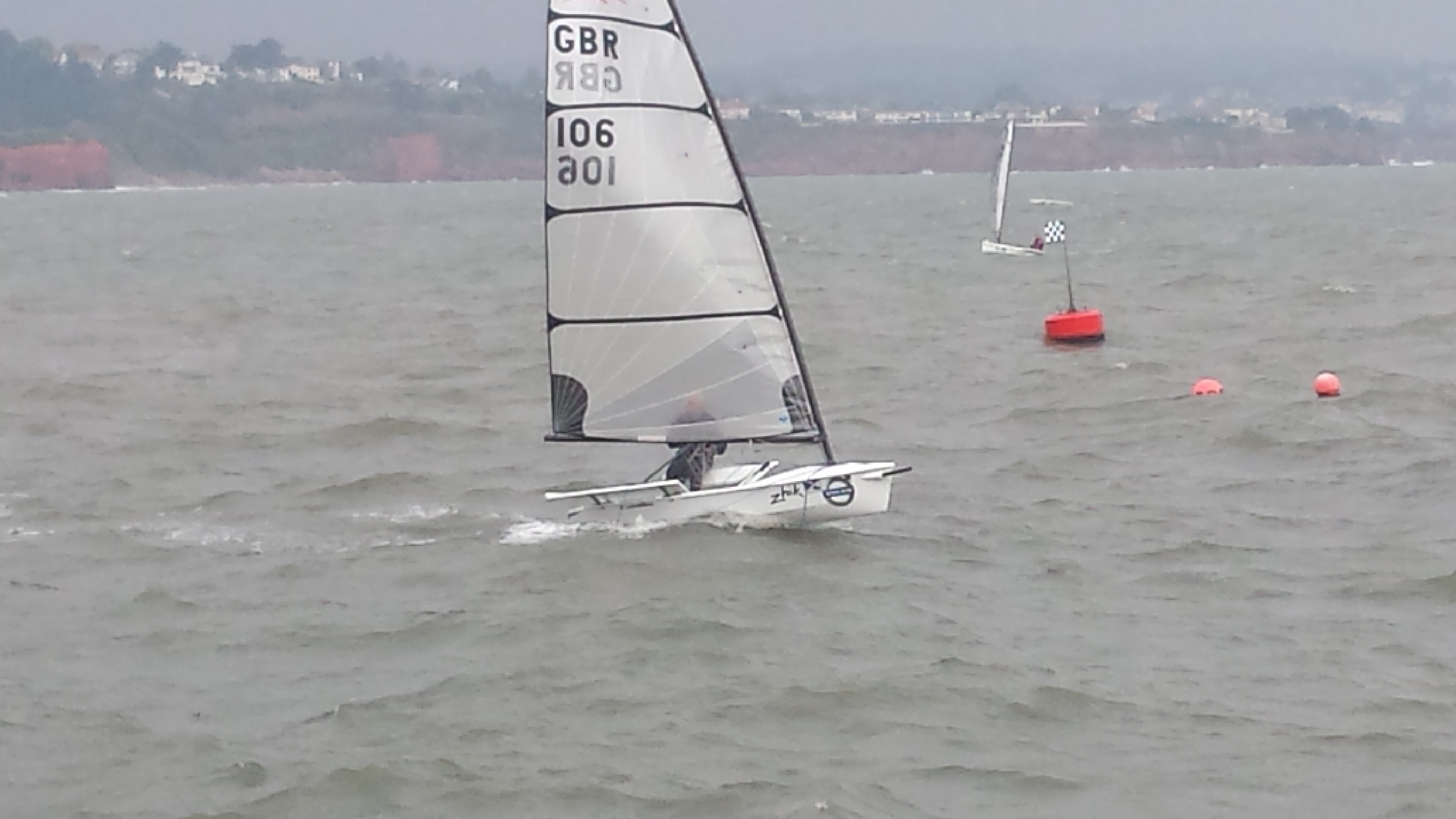 Paignton Sailing Club welcomed seven D-Ones to the South West for a cracking two days of racing for their Grand Prix Series as part of the annual P.O.S.H. regatta.

Conditions were testing with a fresh easterly blowing a moderate swell across Lyme Bay into Torbay. This made for entertaining launching and landing in the harbour with gusts coming from all directions and a swell coming round the sea wall.

Having successfully navigated to the start the breeze settled in time for the first race but the large and confused sea state made it difficult for all competitors, working hard for the boat speed sweet spot. Downwind the D-Ones took advantage of the swell in the softening breeze and getting them both right was met with great rewards. Nick Craig developed an early lead which he held all the way with Humphrey Carter in second followed by Simon Heusen. Heusen was close enough, though, to take second at the last moment after Carter’s mistake left him swimming just in front of the finish line.

Behind them there was a battle between Dave Gorringe, Nick Orman, and Giles Chipperfield finishing in that order. Paul Birbeck followed, struggling the most for speed in the seastate being new to the boat and coastal sailing. As the afternoon went on the wind dropped further allowing Orman and Chipperfield to get the better of Gorange in the final 2 races. Heusen sailed a fantastic second race keeping Carter at bay but in race 3 it was Carter who claimed second behind a rampant Craig. Orman had the better of Heusen up the first beat , both showing they had found some pace over the summer and were splitting tacks throughout the race until Heusen came through on the final lap.

On Saturday night the Paignton Sailing Club were incredibly accommodating hosts supplying the necessary curry and beer and Snickers. Sunday morning greeted competitor’s aching bodies and fuzzy heads with a bracing breeze and increased swell. It was enough to put some off entering the swirling waters of Paignton Harbour. However, 2 races were sailed in the rolling swell.

The conditions caused difficulties for all sailors to stay upright the D-Ones taking off down the waves. With the timing of gybes crucial it was Orman, in the first race, who sailed most consistently to take second from Craig followed by Heusen and Carter. The final race saw a rare slip up from Craig who capsized on the first downwind. This allowed Carter and Heusen through but a determined Craig battled back up to second on the final beat.

Thanks to Paignton Sailing Club for a great event and to all D-One sailors who competed.

More in this category: « GBR: D-ONE Grand Prix Event: Paignton - May 2013 GBR: Famous D-One sailor ignores the rules »
back to top
You are now being logged in using your Facebook credentials