The D-One class continued its tour of the glamour locations of Europe with a trip to the elegant resort of Santa Margherita on the Italian Riviera, where we sailed from the bars and restaurants of the inner harbour to a windward mark among the sterns of the superyachts moored off Portofino.

The circuit has been arranged to make it accessible to our remarkably international travelling membership, and included a weekend Italian Nationals, followed by a pause for proper holiday (or proper work, if you really had to), before the 4-day Europeans starting on Thursday.

The holiday aspect brought a large number of partners and family to a truly glorious area, and boats came from Poland in the North, Hungary in the East, Newcastle in the West and from the South we were delighted to see again a large and extremely competitive Italian fleet after a few years of less activity. It is also great to see new faces from our growing French and Swiss fleets, with particular respect to David Bremond (FRA), who got married on the Friday and still sailed both days of the Italian Nationals before enjoying the area even more for his honeymoon.

The Italian Nationals were won by Enrico Ciferri with a combination of great upwind speed and bold tactics in the swinging breeze, giving us a clue how difficult this venue could be, and beating Alessandro Novi and Giando Boglione into 2nd and 3rd. There was clearly much to be learned by visitors on what is known locally as the Golfo dei Nesci – helpfully translated for us into English as “from ‘nescio’, ‘I don’t know’, meaning ‘Gulf Of Idiots’ “. We all felt like that at some point over the next few days.

Racing for the Europeans was expected to be tight with 29 boats from nine nations. International arrivals included Viktor Teply, Czech Laser representative at London and Rio Olympics, Giles Chipperfield, who showed bursts of speed at the Gold Cup in Austria and Marek Bachtik who showed a rapid ability to grasp the local intricacies of the Italian Championships. 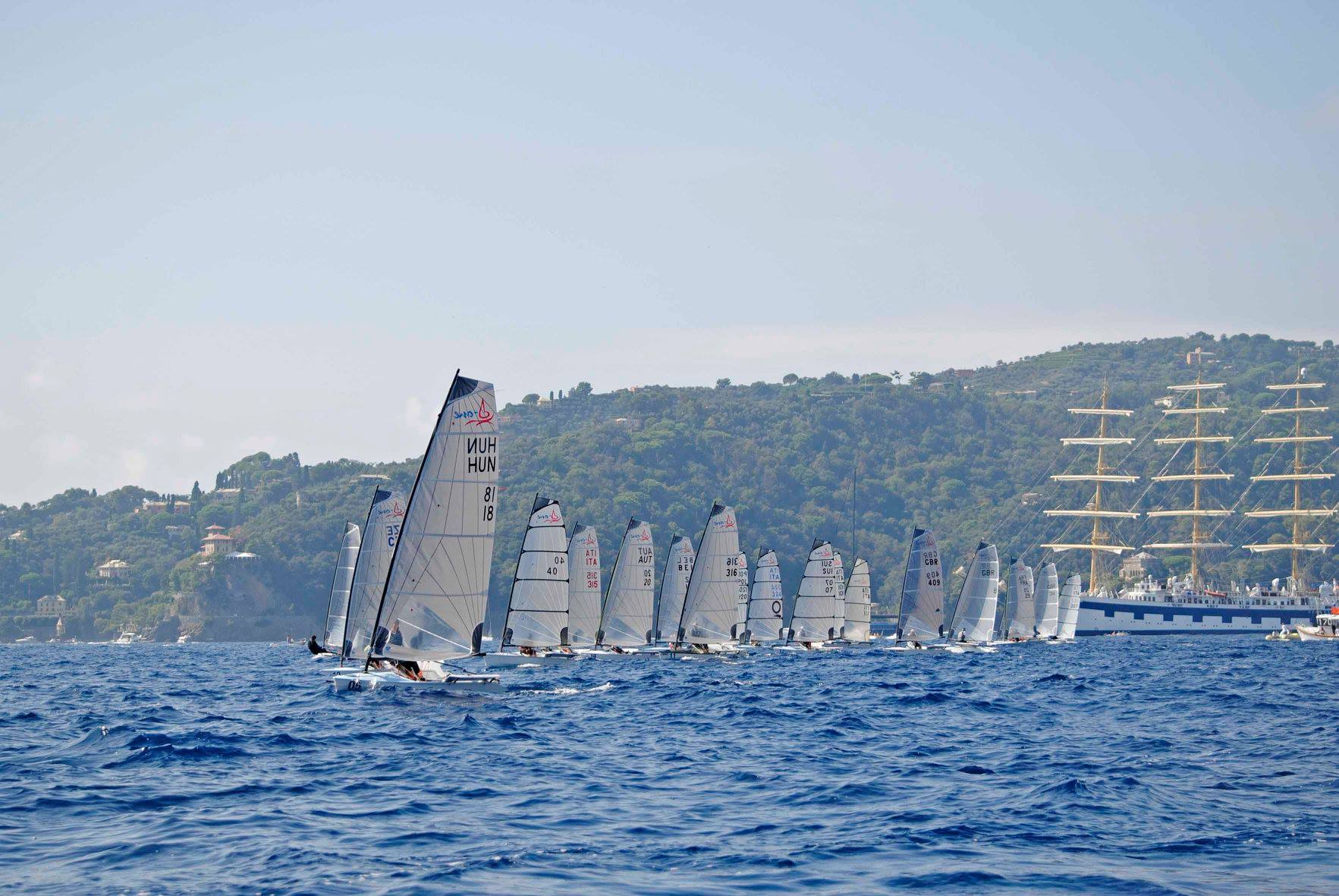 Race Day 1 started in a 6-8knot breeze in baking sunshine on indigo-blue waters. Howard Farbrother showed a cavalier disregard for the pack of Italian boats heading for the expected right shift around the Portofino headland, hit the left hand corner and took the race win by a large margin. In the next race, the exact opposite tactic worked, but not for Howard, while Giles Chipperfield showed remarkable downwind speed to take the lead at the last mark. Viktor Teply  posted two seconds, and looked the most solid performer as well as holding the overnight lead.

Day 2 started in very similar conditions, and the start line became considerably more active as everyone realised the critical need both to get away in the front line and to gain a position with enough room to take the shifts as they came. The game was further complicated by a line where the favoured end changed every couple of minutes as the shifts arrived. Giles proved to have both the tactics and the speed in these conditions, and took a pair or wins while Viktor struggled to get clear of the pack to end with 8th and 3rd. Giles had the overall lead but the next day’s discards would eliminate this, while Alessandro Novi was now a threat to both leaders with faultless tactics and excellent upwind speed. Interestingly, the weight and size of the different helms in the fleet seemed to make very little difference in the lightish winds, with similar speeds for all and boathandling and tactics being far more important.

Day 3 was different. Very different. A bit more windy – 12-15kts, but with a massive rolling swell from a scirocco off Corsica, overlaid by a random short chop generated by the weekend power yachts cruising the bay. At least the chop died down for a while when the yachts stopped for lunch at Portofino, but the swell made for a proper workout upwind and some spectacular surfs downwind. The windward mark was set somewhere off Sardinia to give a full length race, and it was Viktor’s turn to show that a professional laser sailor can hike harder than anyone while also demonstrating impressive ability to work the boat through the confused sea state. With two emphatic wins, Viktor was now tied with Giles on points, with Alessandro and Howard close behind. The last day was looking rather tense. 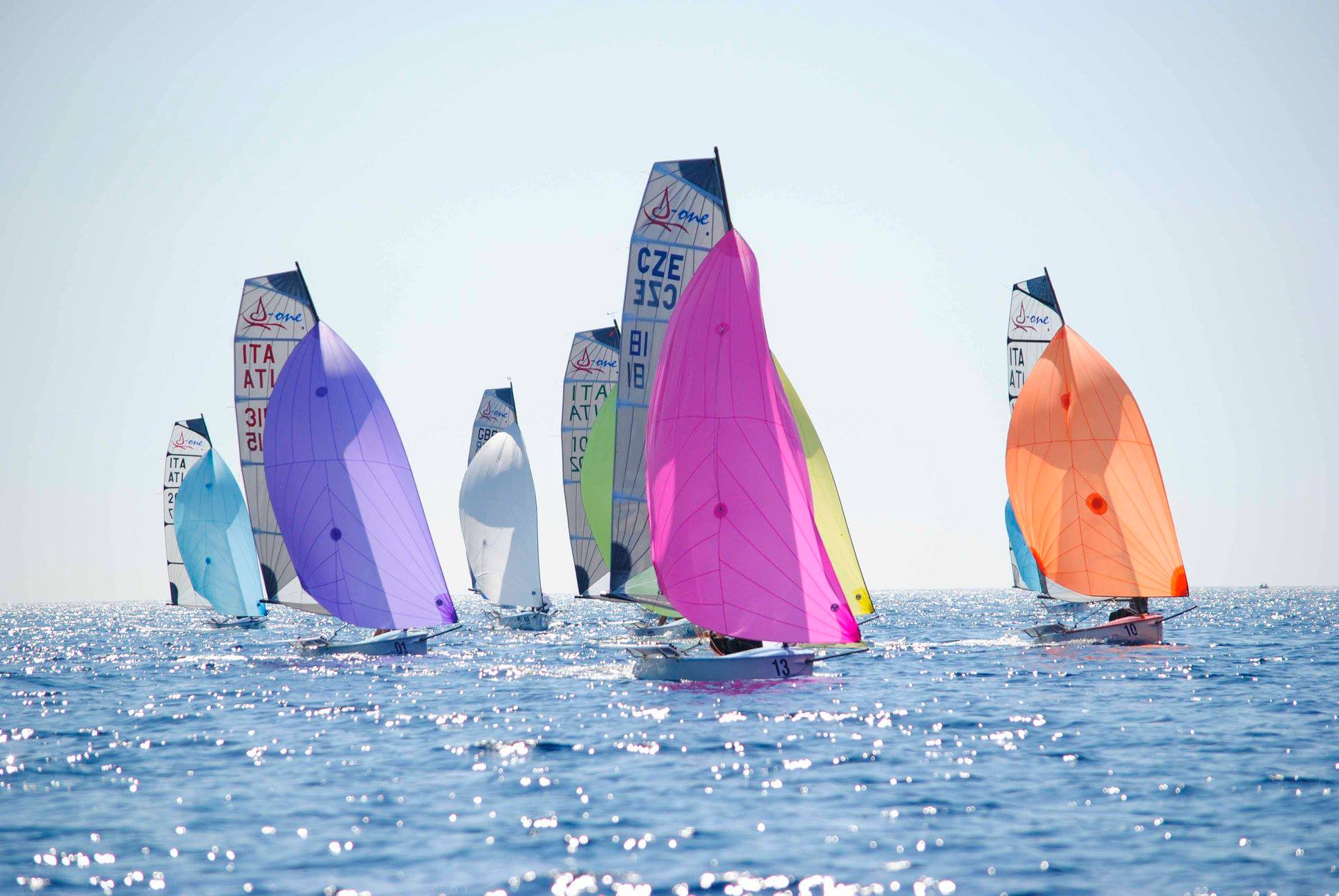 For Day 4 the scirocco had gone and the wind was back to 8-10kts, but the yacht chop was even more evident and there were some new techniques to learn to keep the D-One driving through the chop upwind and then to work the unusual surfs downwind. Unsurprisingly, Viktor and Giles never went very far from each other in an epic covering battle from start to finish of race 7. At the first mark both were down in mid-fleet, while Enrico came roaring back into contention with extraordinary upwind speed for a long lead. Alessandro and Howard were also obviously concentrating on each other, and well down the fleet, leaving Jorg Deimling and Riccardo Pontremoli to lead the pack after Enrico. In an action-packed last run normal tactics were abandoned as the dice were rolled and those needing a big move headed for the corners. At the finish Enrico was still unchallenged, but Giles had reached second while Viktor was fifth. This left one more match race to decide the championship.

The final race provided a proper grand finale, with a massive square rigger making the photographers’ day near the windward mark and a repeat of the intense match races throughout the fleet. While most had become more comfortable with the conditions, Enrico remained supreme and scored a second convincing win which jumped him the fourth overall. Alessandro confirmed his third overall with solid tactics to gain clear wind and good speed once there. Giles and Viktor battled all the way round, and in the end were separated by just one place. So Giles is the new D-One European Champion.

The D-One has evolved into a highly international class with a very friendly family of sailors, and we have been to some wonderful places this year. Santa Margherita was a fabulous place to sail, a memorable holiday destination, and the Lega Navale could not have been more helpful and hospitable. Special thanks to Italian Class Secretary Tommaso Buzzi, who organised the whole event.

The international circuit for 2019 is looking great for the class 10th anniversary year, with the Gold Cup in Champagne, France 7-10 June and the Europeans at Lac Biel, Switzerland 12-15 September. For more information go to https://www.d-oneassociation.org/ or https://www.facebook.com/DOneAssociation

For those who wish to remember, or regret missing it, there are wonderful photos courtesy of Bianca Roccatagliata at https://www.d-oneassociation.org/gallery/photos