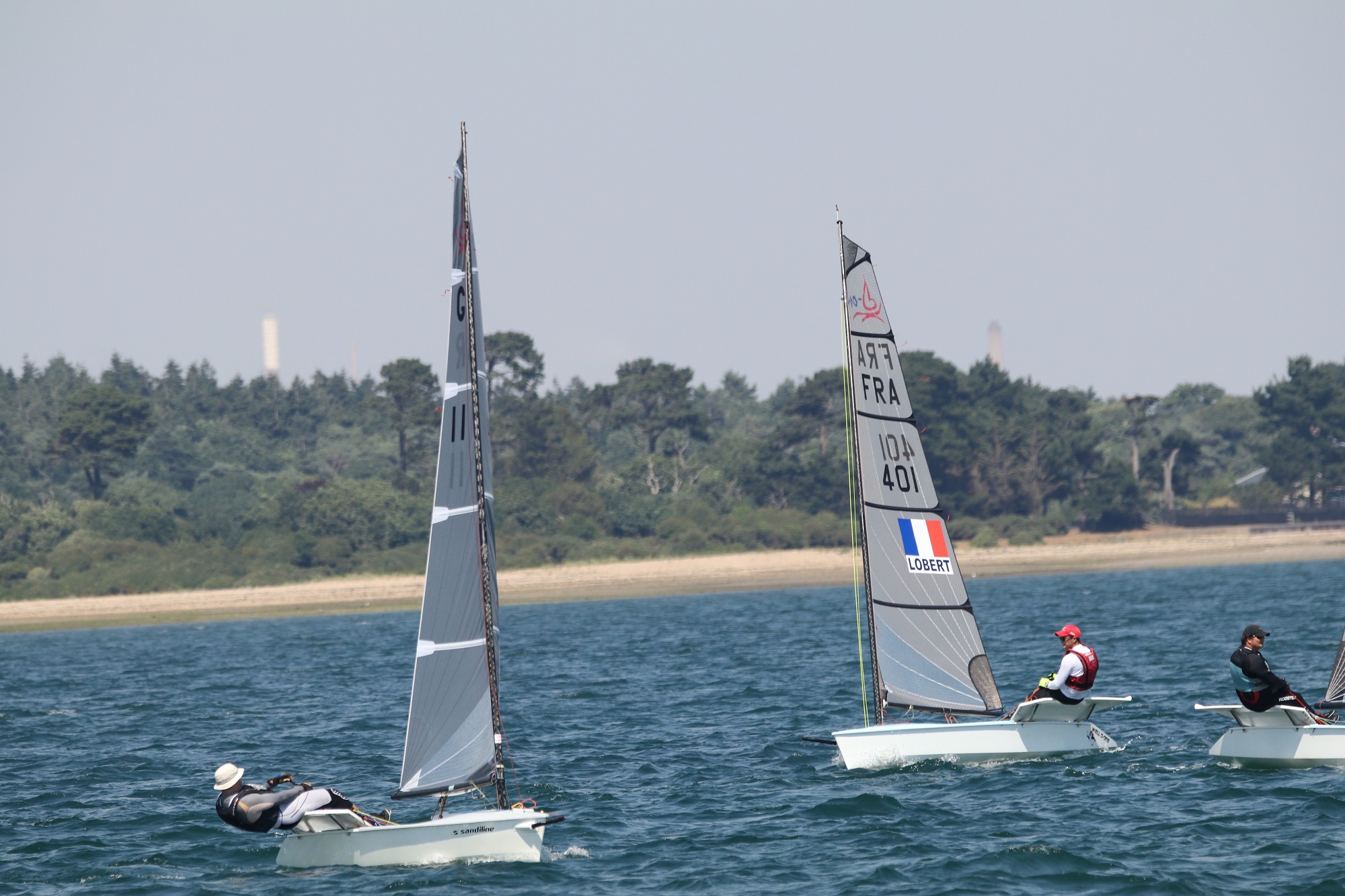 With entries from Switzerland, France and Italy 20 D Ones gathered at Lymington Town Sailing Club on the 5th of July for the 2018 National Championship.  The event opened with a day of on-the-water coaching followed by a video review in the bar at LTSC.

Racing commenced on Friday in perfect sea breeze conditions with wall-to-wall sunshine and 15 to 18 knots of breeze.  Rob Jones opened his first D One nationals with a perfectly executed port tack start as the fleet headed inshore for tidal relief.  Current D One World, European and National champion Nick Craig soon made his way to the front of the pack and led to the finish.  With Tim Garvin and Chris Sallis rounding out the top 3.

The breeze and sea state built a little for the next race and the whole fleet enjoyed some fantastic downwind rides.  Nick continued to control the racing with another win this time with Giles Chipperfield taking second and Chris pic
king up another 3rd.  racing was tight throughout the fleet with every boat length being gained or lost on the smallest of margins.  2 more races were sailed in the superb conditions with Nick taking a perfect scoreline Chris in 2nd and Giles in 3rd.  the fleet returned from an epic days sailing to enjoy a meal and a few beers at LTSC.

Day 2 saw similar conditions with slightly less wind; everybody had worked out the tidal flow which made starting near the committee boat and taking an early tack a premium.  Another 4 races were sailed in the superb conditions Nick continued to control the racing although a rare slip up saw him roll in at the leeward mark allowing Rob Jones through to take the win.  Giles continued to be super consistent seeing him move up to 2nd and Rob move ahead of Chris into 3rd.  A few more beers were enjoyed in the evening and LTSC hosted an excellent regatta dinner.
Sunday was on an earlier schedule for the last race of the regatta and the RO called the fleet out around midday as the sea breeze began to settle.  This was the lightest race of the series and most were happy to consolidate their positions and not take too much risk.  Nick once again took the bullet with Howard Farbrother and Giles fighting it out for 2nd and 3rd.  The final results saw Nick adding another national championship to his long list of wins, Giles was a convincing 2nd and Rob took 3rd.  our friends from Europe; Patrick, Etienne and Tommaso all enjoyed the fantastic British conditions and the Italian was even heard to say 'it is quite warm!'
LTSC hosted an excellent championship and thanks must go to Giles and Heather Chipperfield for all their efforts in organising the event.  The class now looks forward to the European Championships in the Gulf of Liguria this September and championships in the champagne region of France and Lake Biel in Switzerland with a feeder event in Lake Como.
For more photos look at https://www.d-oneassociation.org/gallery/69-photos-2018-gbr-nationals 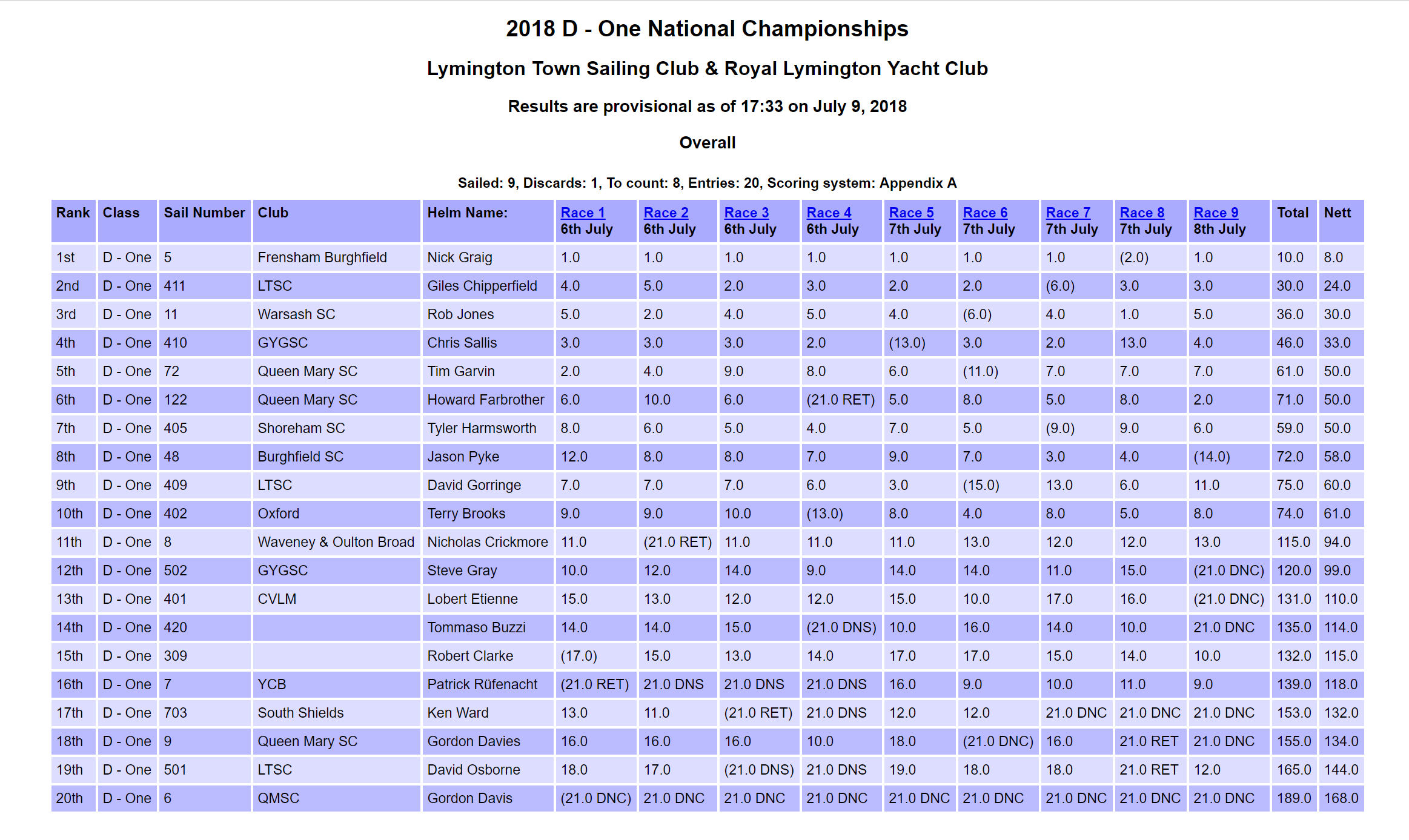