Second race for the “Tour de Australis” series took place on the 7/8th November at the Big River Sailing Club at Harwood, which is located on the Clarence River (¾ of the way up from Sydney to Byron Bay) for their “Bridge to Breakers” regatta.

There were 2 D-Ones at the regatta, local boy Mark. Plus me, Peter, who made the journey from Sydney.First race for the “Tour de Australia” series was on 4th October up at Richmond River Sailing and Rowing Club in Ballina (coastal town in northern NSW) for their “What is a wetsuit” open regatta. We had 2 D-One at the regatta, local boy Mark Pierce. Plus myself, Peter Ineson, who made the journey up from Sydney. 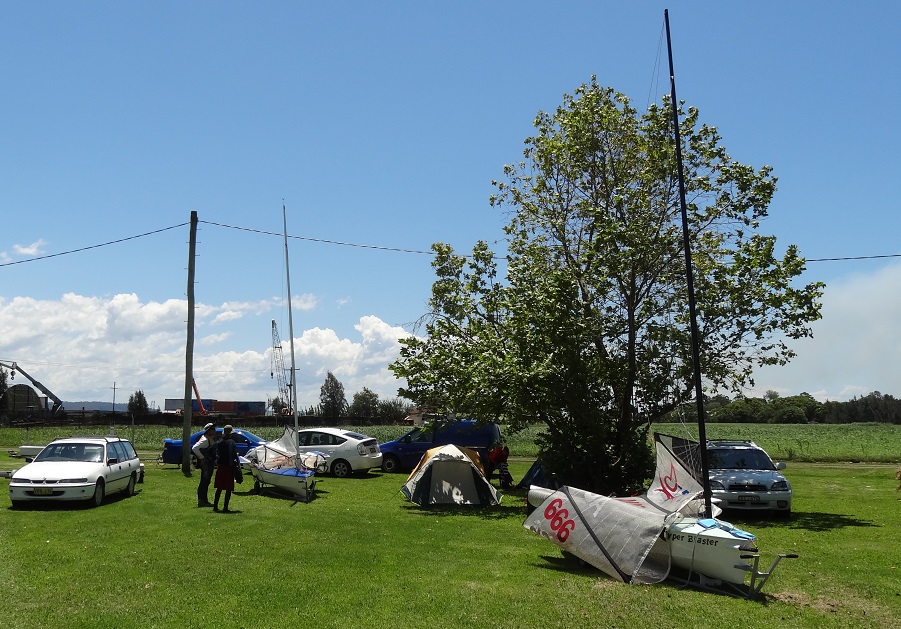 The first day of the event was a long distance race. The start was at the sailing club and course went down to a mark just off Iluka (the “Breakers”). Then back up the river to the “Bridge”, this is the bridge for the Pacific Highway, the main road up the eastern coast of Australia. 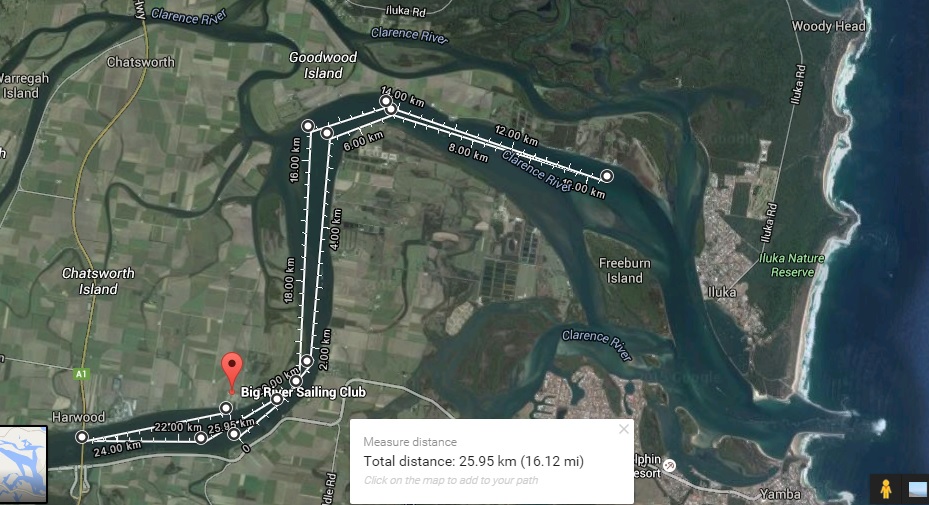 The day was perfect, a cloudless and a nice wind from the SE at a bit over 10kts. This meant we had a reaching start, it is interesting to see how different fleets tackle this, Lasers sat on the line till the gun went, everyone else charged at line as fast as possible. Once we hit the first bend in the river the wind had moved into an angle where the kite could be used and the fleet really started to split apart. The next bend in the river was the start of a long beat up to the turning mark at Iluka. This leg was about 4kms long and did cause some sore ankles! By the rounding mark the wind had increased to a bit over 15knts. Next stage was a board reach back up the river, Mark stayed safe and elected not the kite. I was more gun-ho and got it straight up, the result was a glorious blast back up the river. After the last rounding at the bridge it was the a close reach back to the finish line outside the club house.

Once back we were treated to cake, beer, then dinner and more beer. Soon after collapsing into the tents the sky put on an excellent display as a thunder storm came and sat on the area.

Sunday dawned cloudy with the odd rain squall. After a monumental slap up breakfast the racing started. It consisted of 3 races around buoys. The first two races consisted of lots of non-spinnaker reaches and was good for the non-spinnaker boats. By the final race the wind had turned so it was possible to use spinnakers on the longest reach, myself and the 2 F15s had a ball blasting off into the distance.

Big thanks to all at Big River Sailing the warm welcome and running the excellent event Especially the catering for excellent selection of cakes and fantastic meals, diets are now required.

More in this category: « AUS: D-Ones at RRSRC "What is a wetsuit" regatta AUS: D-One wins ACT Dinghy Championship »
back to top