The D-One fleet joined many, many other dinghies over the weekend to enjoy the combined hospitality of Royal Lymington Yacht Club and Lymington Town Sailing Club for their annual dinghy regatta. The organisers kindly arranged an extra race on each day and dedicated prizes.

The D-Ones are a very international class, with popular annual events in glam locations on the med and across central Europe and although most travelling fleets are suffering post-Brexit, post covid, post-fuel hikes, it was encouraging to see new boats starting to appear in the UK once again as Messrs Nick Favell and Nick Crickmore sported VERY shiny new boats. Game on!

The forecast was a mild Northerly and blistering sunshine, which had locals muttering about seabreeze, cancellation and other positive vibes. Luckily the northerly held and we all dutifully trotted out to assume the position mid-Solent and admire the swift lines of the rather beautiful 50ft committee boat, and wait while the poor old race officer tried to get a fix on the flickering breeze. He clearly didn’t trust the fleet’s intention’s as he made sure to set an inner start mark 10m away from the generously loaned his shiny toy. RS800’s shot off first followed by RS700’s and then the D-Ones neatly blended with every other orphan class in the fast handicap. This made for a hugely interesting first beat with cross-tide starting to build and a Northerly that was rapidly losing faith in its own abilities. Judging by the noise it wasn’t just the wind as many types of boat, trapeze and scaffolding arrangements converged on a massively outnumbered windward mark. 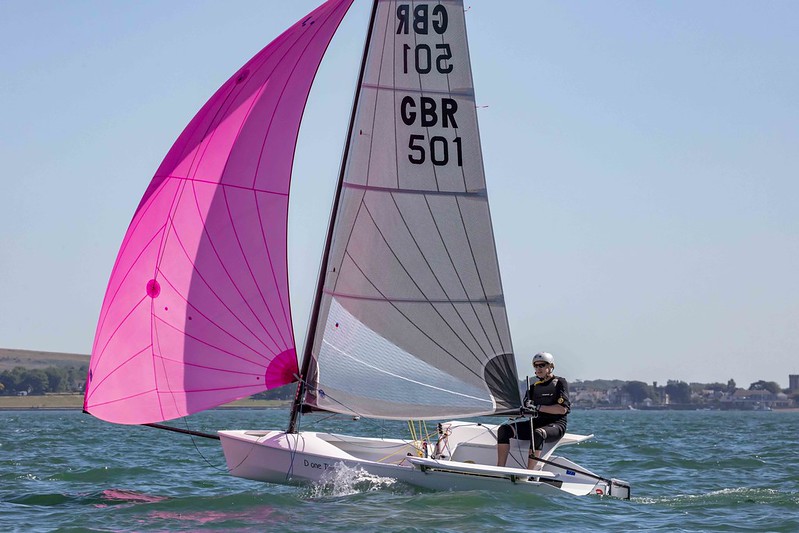 Despite the existential challenges, the ever-reliable Nick Craig negotiated his way through the fleet to build a significant lead, leaving the rest to make its cautious way through the pix’n’mix fleets. Howard Farbrother emerged from the melee in 2nd with Michelle Collier-Brooks bouncing into third.

Race two had to wait until the seabreeze kicked in from the southwest, and the tide started to run in earnest from the same direction. This simplified the tactics to an uptide hikeoff into the glorious sunshine, reducing the compass to little more than an ornament. 15 lactic-filled minutes later people put in their second tack of the race for the layline across the tide. With so much to play for this defined the race. Someone called Nick got away leaving Farbrother, Collier-brooks and Jason Pyke to torture each other for the next batch of places. Jason won out with some pinpoint layline accuracy with Howard and Michelle rueing their overstands.

For the third race the D-One’s had the luxury of their own start, everyone else presumably bored of hiking for an eternity for five minutes of downwind/tide fun. The race officer was even less trusting of this new situation so set a large pin bias, forcing a port-tack judgement call about keeping high, or trucking off right into lower tide. People called Nick took three of the top six places, with an all-race tussle between Michelle, Howard and Jason and for 2nd, 3rd and 4th respectively. Fleet newcomer Thomas Ehler showed some promising initial speed but was last spotted asking about new sails having the only old-style main in the fleet.

The next day dawned with even less initial gradient breeze and not a cloud in the sky. An hour’s postponement was spot on, and the seabreeze built slowly and more gently from the same direction. Luckily this time the tide mercifully helped people accelerate upwind with people enjoying the occasional extra tack just for kicks. Results wise however the day went in much the same vein, with Nick Craig leading the way until the last race when for once Farbrother beat him to the windward mark, this aberration lasted until Nick executed a perfect cover gybe, leaving Howard pondering the merits of fake gybes and second place overall. Jason Pyke and Michelle Collier-Brooks fought tooth and nail for third place with Michelle taking 2nd in countback. Nick Craig was duly proclaimed 2022 National Champion for the D-One fleet and sauntered off with the World’s largest cast-iron trophy tucked possessively under his arm…again.

The next seaside D-One event is planned for Warsash when its much cooler, with the Inlands are pencilled for the burgeoning local fleet in Leigh and Lowton in early September. Details available on the D-One association website and Facebook group.