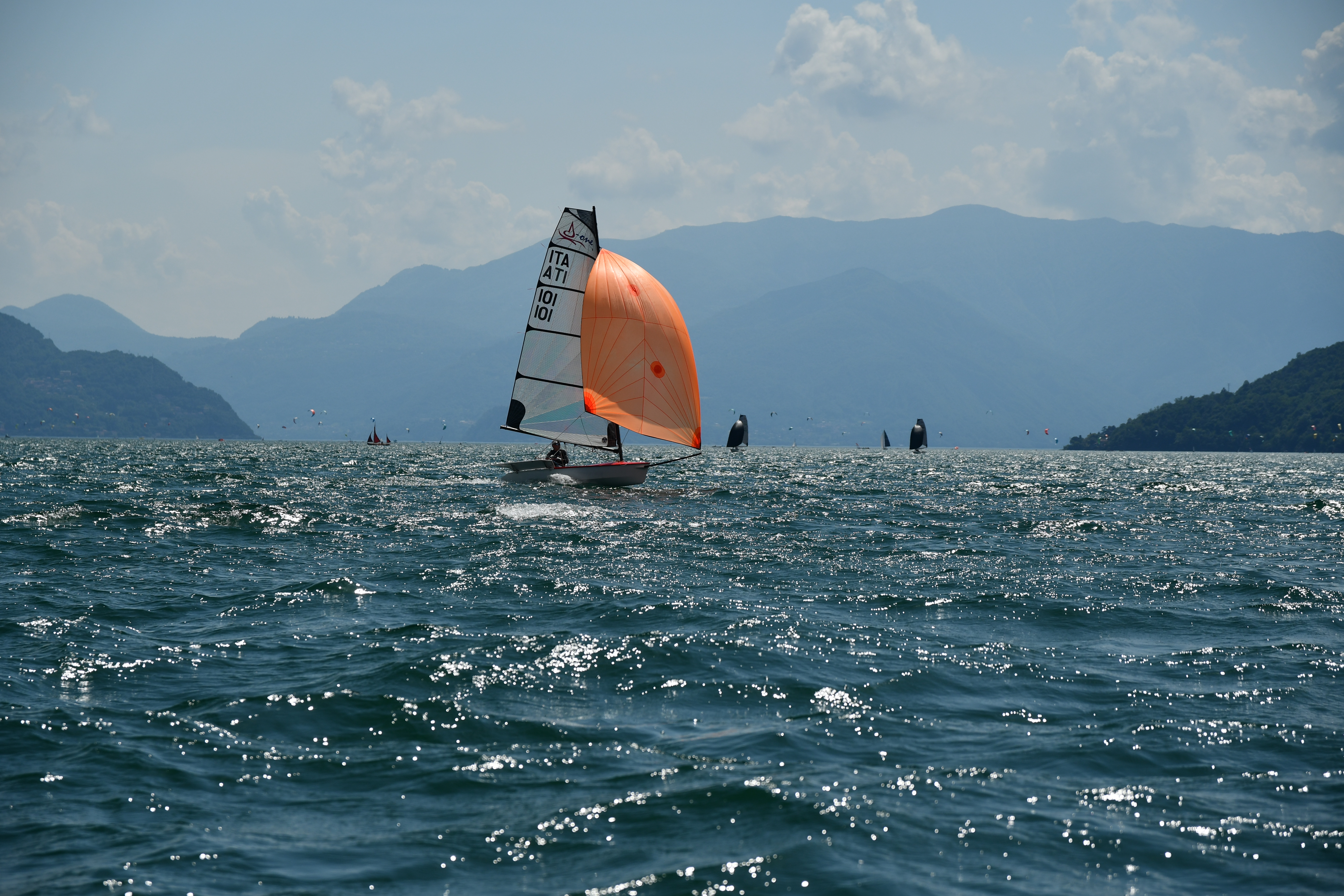 The D-One has always specialised in great championships in beautiful European locations, so, after two years of very little international sailing, D-One sailors from all over Europe are delighted to have finished a fantastic Gold Cup on Lake Como, hosted by Centro Vela Alto Lario at Gravedona.

A warm-up event was held with the Yacht Club Dervio, on the opposite side of the lake, the weekend before, and showed the 15 boats attending that this was going to be a cracker. The baking sunshine brought 15-18 knots of thermal southerly, with a continuous range of shifts and gusts meaning that no particular route was a certain winner either upwind or down.

Alessandro Novi (ITA) showed tremendous pace to win the event. Marek Bachtik (CZE), Patrick Rufenacht (SUI) and Nick Crickmore (GBR) also found a way to the top of a fairly high-scoring event, but all had some erratic results when caught out by the shifts, or just an out-of-practice capsize. These top four awaited the arrival of the rest of the Gold Cup fleet with more or less confidence in their mastery of the lake conditions.

The Gold Cup itself was held after a short break for tourism. 26 boats from 8 nations raced for 3 days, completing 8 races.

Conditions mostly remained in the ideal but solid 12-17 knots range, with the full range of shifts, gusts, lulls and bends appearing and disappearing as the course was moved to suit the day's wind pattern by the excellent PRO Walther Ghezzi and his team.

Planned start times were in the early afternoon, giving a pleasantly light sail upwind to the start, three races in generally increasing wind, and then an awesome 2 mile downwind blast home to emergency pasta, pizza and beer laid on the the club.

The third day was started at 11 in the morning to get two races in before the forecast storm, which failed to put a damper on the previous day's dinner at the Club. The fourth day was lost to the aftermath of a big rain storm, but most aching bodies were satisfied by then, and there were some very long journeys home which could start earlier than expected. 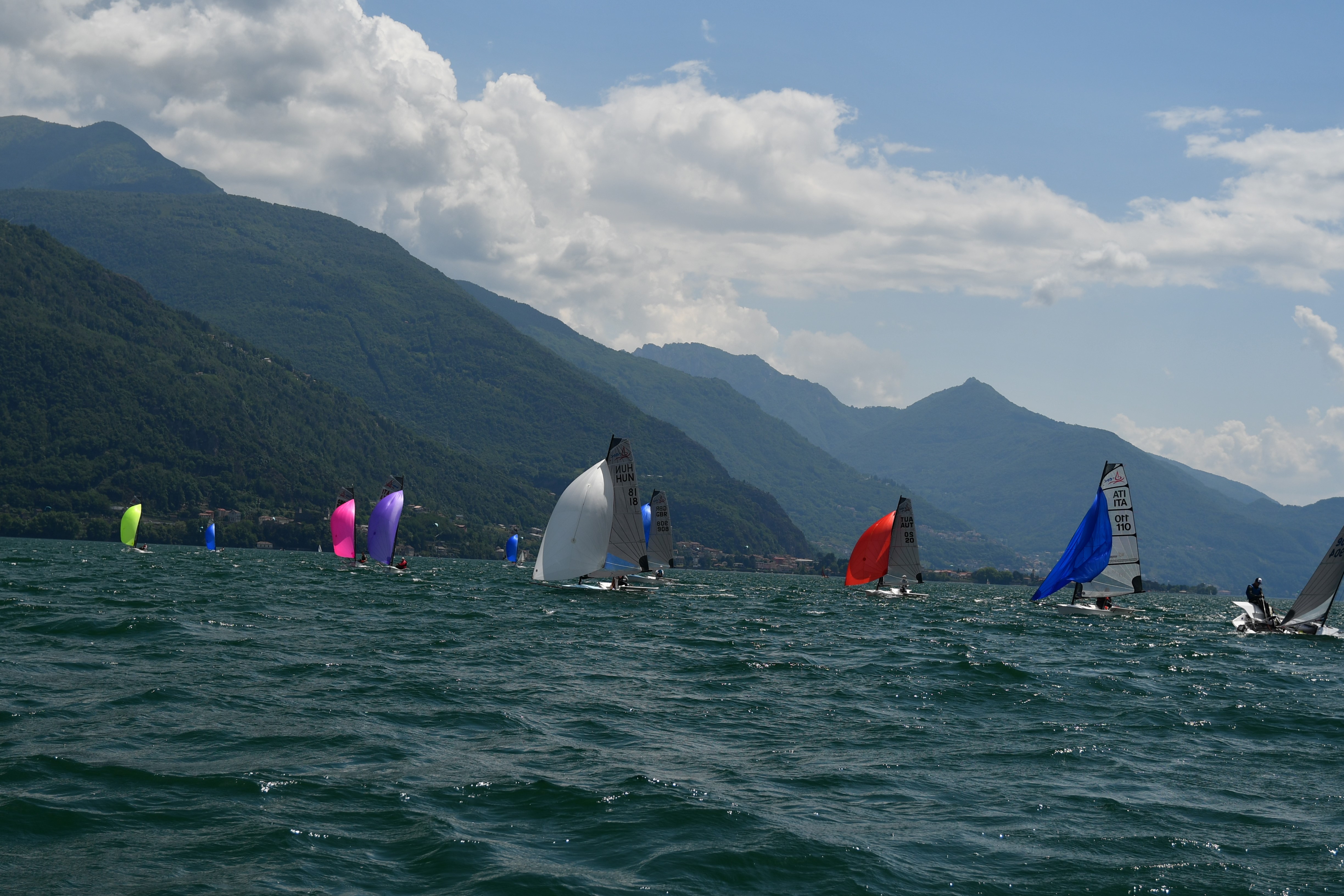 Needless to say that the best won, so Nick Craig (GBR) won the #goldcup22, behind him Alessandro Novi (ITA) and in third place Ulrich Breuer (GER). Nick showed amazing pace and great starting throughout to win all the races, but was run hard at times by Alessandro Novi. After that the points were pretty close to Giles Chipperfield (GBR) and Marek Bachtik (CZE), as everyone had their moments of glory and catastrophe.
The next block of the fleet had very tight racing: only 10 points separated 6th to 12th places, and while Italian Class Secretary Tommaso Buzzi was delighted with 6th, Michael Mutti (SUI) with a 2nd and 4th may feel surprised to end up in 12th overall. It was fairly evident as well that many of us were out of practice with big fleet racing, as busy mark roundings and urgent gybes started tempting the photographers for some fun.
The prize for the furthest travelled went to Geza Matyasovszkyi (HUN) and, after some dispute, the prize for oldest competitor was ceded by Enrico Ciferri to Giorgi GianLuca (ITA) 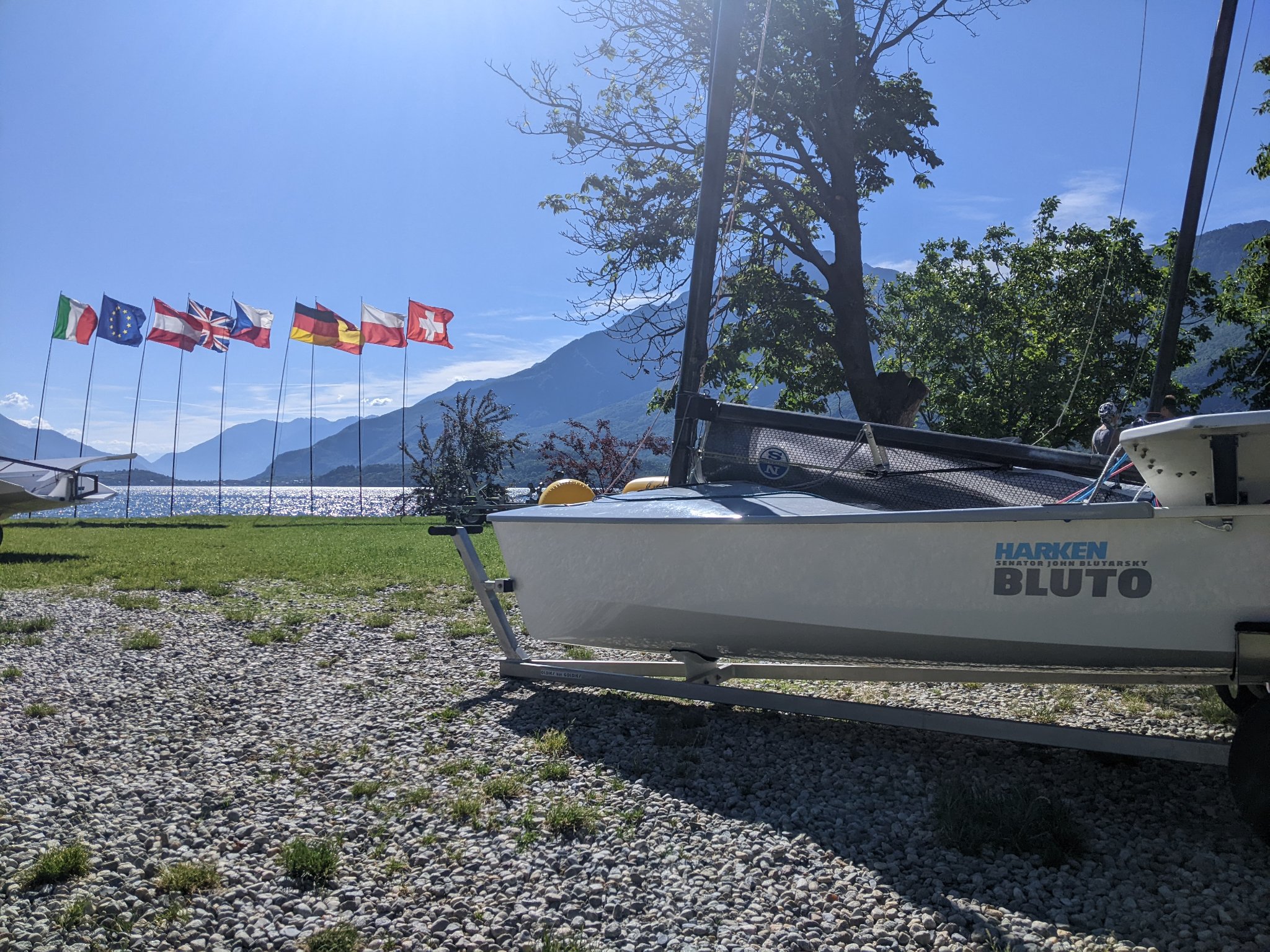 Huge thanks to #avalcdv , and especially President Emanuela Migliavada and PRO Walter Ghezzi, as well as the fabulous Elena and Fabio in the clubhouse. They made a real wonderful event in and out of the water!
This was an unexpectedly good turnout after such a long pause, so thank you to everyone for travelling. It was great to see the return of fast German sailors to the class, and also the influx of new Italian sailors who seem to be learning very quickly. Welcome also to our first ever Spanish sailor Juan Maristany. The Austrian fleet is growing enormously, only constrained by the difficulty of getting boats built by Devoti during the current period, and while we missed our French friends we are assured they will be back soon.
The D-one remains an interesting and attractive class made up of people who love this boat, and it is wonderful to be back sailing with our friends in beautiful places. The next event is the Italian National Championships at Imperia YC, then the European Championships at Lake Balaton in September. Details as always at https://www.d-oneassociation.org/
We are already planning for the Gold Cup 2023 in Austria, probably  at the end of May on the Wolfgangsee at St Gilgen, another fairy tale location near Salzburg. We look forward to seeing you all soon and continuing this most enjoyable journey.
Thanks to James Collier-Brooks, Jana Bachtikova and Tommaso Buzzi for the photo galleries at https://www.d-oneassociation.org/en/gallery/photos