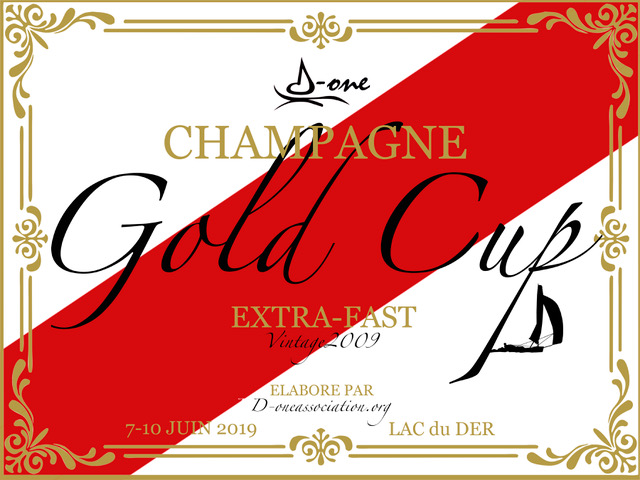 The D-One fleet were treated to a Gallic Regatta for the 2019 Champagne Gold Cup organized by  Emmanuel Abord and  Etienne Lobert and hosted by Ligue de l’Enseignement Giffaucourt at Lac du Der 7 to 10 June 2019.

The rest of the French fleet, Marie Benoit, Thierry D'Allance and David Bremond did a fantastic job assisting with all the background tasks that made such a great regatta. A big thank you from all the competitors, especially the Czech-Italians who were politely allowed to beat the French in the international boules contest. Or so the hosts said. 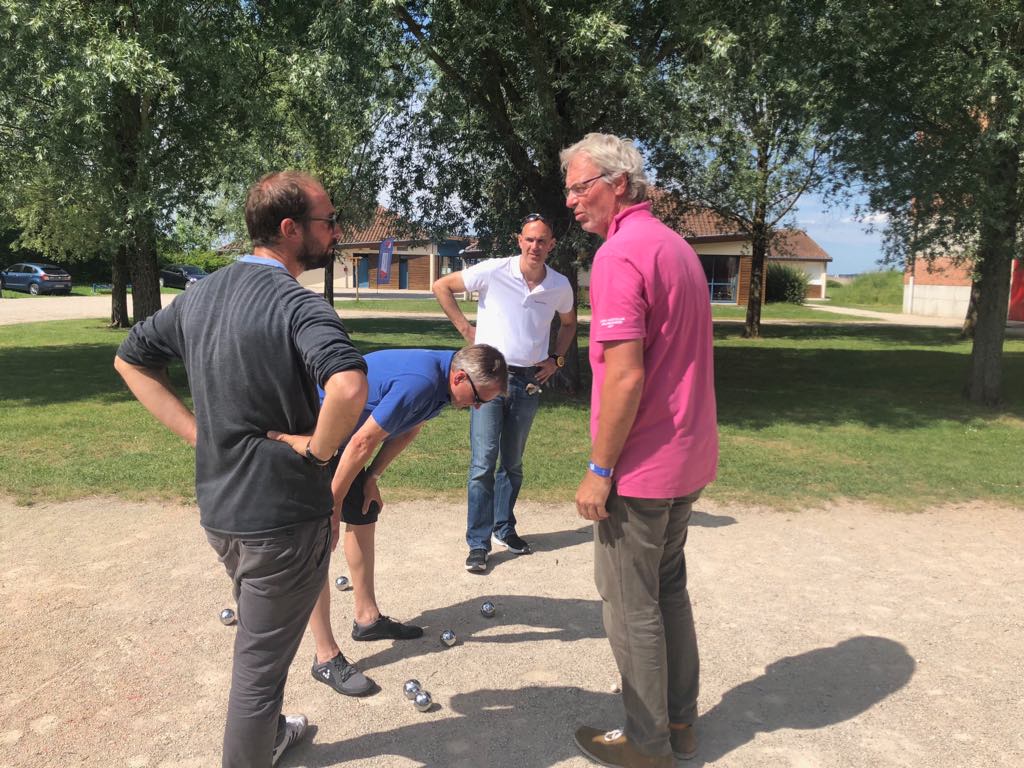 As sailors and support teams arrived from 7 nations on the Thursday everyone was enjoying the sunshine and light winds. Unfortunately the weather was not going to last. Friday dawned with a forecast of 23-30 kts with a storm with a name moving across Europe. The intrepid race management team set off ready to start at 1500. Launching in to the shelter of the club house seemed OK but a short sail later it was clear the fleet were in for a wild ride. A couple of keen racers headed up wind to check out the windward leg, but even the best did not make it back downwind without a swim.

After a short delay the wind eased, although dramatic shifts under the clouds made for a tricky course. The favoured pin end was crowded and the fleet arrived closely bunched at the first mark and proceeded down the uncharacteristic first reach ,second reach and third reach, the fourth leg turned into a broad reach with gybe onto the last reach. The intervals between gusts resulted in some exciting mark rounding groups, and the short beat to the finish required concentration to get the best place in a still tightly packed fleet.

The course was reset to achieve the planned wind angles for race 2. Tim Johnson nailed the pin end to lead the front group up to the first mark. It was tightly bunched throughout the fleet but current champion Nick Craig managed to wriggle through to win. Everyone was relieved to get ashore in time for the "feast of the nations". Our French hosts had invited sailors to bring a traditional national dish to share with the competitors, although the GBR sailors were advised there was no need for them to provide any gastronomic input. This was taken as a challenge and some inventive British delicacies were provided although not necessarily appreciated by our European sailors. The Swiss and Austrians had the fondue on the go, whist the Czechs laid on traditional biscuits with beer. The Italians laid on a comprehensive antipasto course and the French nailed the cheese and wine, obviously.

The second day was was going to be the windy day. With three races to get in we had and early start. The first race the left hand side of the course was the place to be with Victor Teply and Rob Jones leading the charge.  Tyler Harmsworth battled his was through to second, closely followed by Giles Chipperfield, but Nick Craig was revelling in the exciting gusty conditions and romped away to a well deserved first place. In the second race Viktor Teply found his form and led from start to finish. In the last race of the day it was Viktor, Nick and Tim showing the fleet how to do high wind sailing in a D-One. 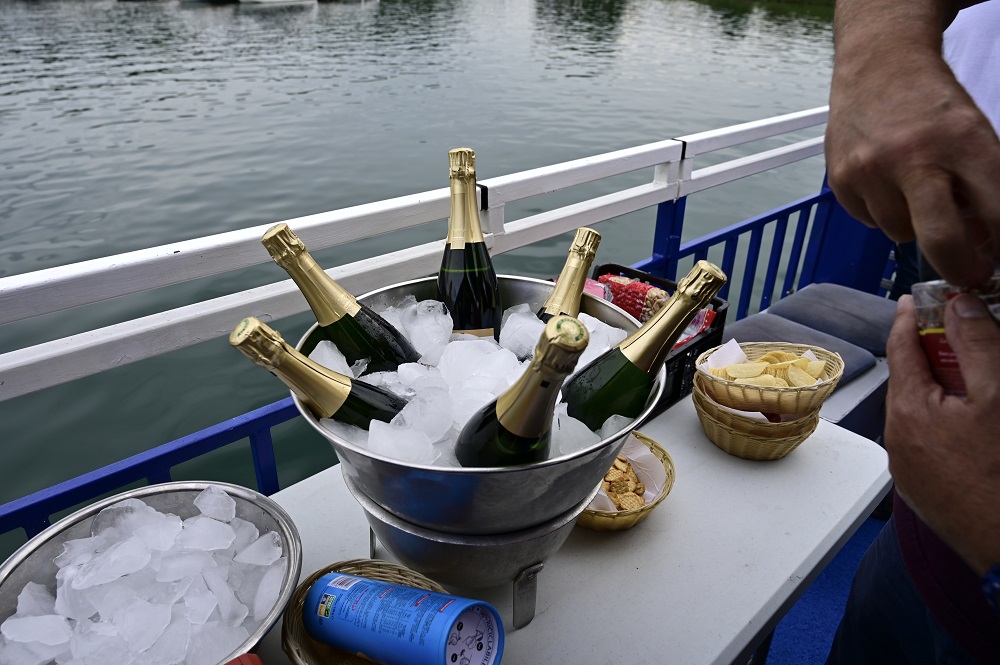 As we were in Champagne the locals were determined to educate us about their favourite product. We were lectured then tested on the history and etiquette of wine and specifically Champagne tasting. My enduring memory will be that "you must not put my finger up the bottom of a champagne bottle, unless it is a magnum" . Fantastic local French cuisine followed washed down with more wines of the region.

Day three was a classic Lac du Der day, a light  and shifting wind getting lighter as the day went on. Some new faces started to shine at the front of the fleet Enrico Ciferri (last years Italian Champion), Howie Farbrother 'le Belgique', Marek Bachtik and Marie Benoit. Marie was unlucky to sail into a hole down the last run when leading in race 8 while Viktor was putting in some solid results to keep in contact on points with Nick. Apres sail  we were treated to a boat trip around the now-tranquil lake with champagne and nibbles with a brief stop for Francesco Gili to demonstrate his photo-drone flying skills followed by a barbecue expertly cooked by Joeg Truebl.

The last day had the Goldilocks weather, just right, bright sunshine and 12 knots of wind. This brought out the best in yet another group of sailors , Stefan Hess, Ken Ward, Jason Pyke and Chris Sallis were all challenging in the lead group. Viktor did everything he could by nailing first place in both races but Nick had done enough with a second in the race 9 to seal the championship win. Giles Chipperfield was third and won the Masters trophy and Tim Johnson in fourth won the Amateurs Trophy.

During the event the class meeting settled the major events for 2020, which will be the European Championship in Palamos, Spain, in late May, and the Gold Cup at Lake Lipno, Czech Republic, in early September. We also had a very well-received suggestion for the class to travel to Sardinia in early June 2021, and this seems to be on many sailors' and families' bucket lists for travel to beautiful places with great sailing.

This years event had great camaraderie with new sailors welcomed in every national team as we sailed in yet another new and interesting location. We are now looking forward to the next event GBR Nationals at South Shields in July  and the European Championship in Lake Biel, Switzerland in September.