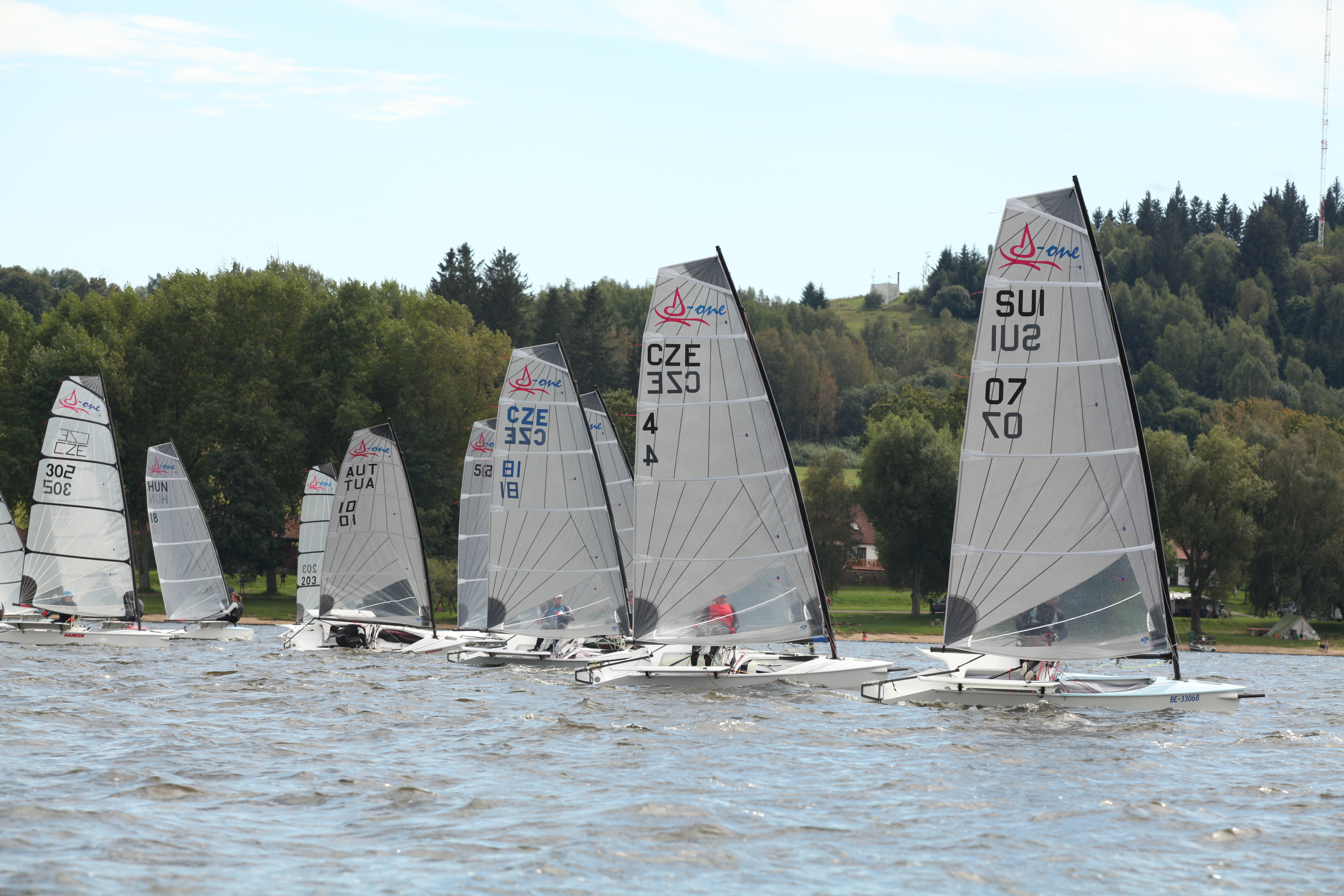 It was a welcome return to Lake Lipno in the Czech Republic for the D One fleet, this time competing for the Gold Cup, again at Kemp Jestrabi venue for the European Championships back in 2016. The event superbly conceived and managed by Victor Teply and generously sponsored by Devoti and Harken.

Lake Lipno’s sub-alpine setting provided a stunning backdrop for the event and is so remote that we had more chance of catching a sheep than the corona virus despite Czechia recently moving onto the red list.

With travel restrictions etc in place the fleet of 15 was not unexpectedly smaller than usual, but made up for this with some high quality sailors including 4 Czechs (two from the Olympic squad) and 11 visitors from all corners of Europe, one representing Argentina as befitting the nearly world championship status of the event. The competitors weighed in with a range between 65kg and 100kg with the boats dual wing settings providing equal racing across all conditions. 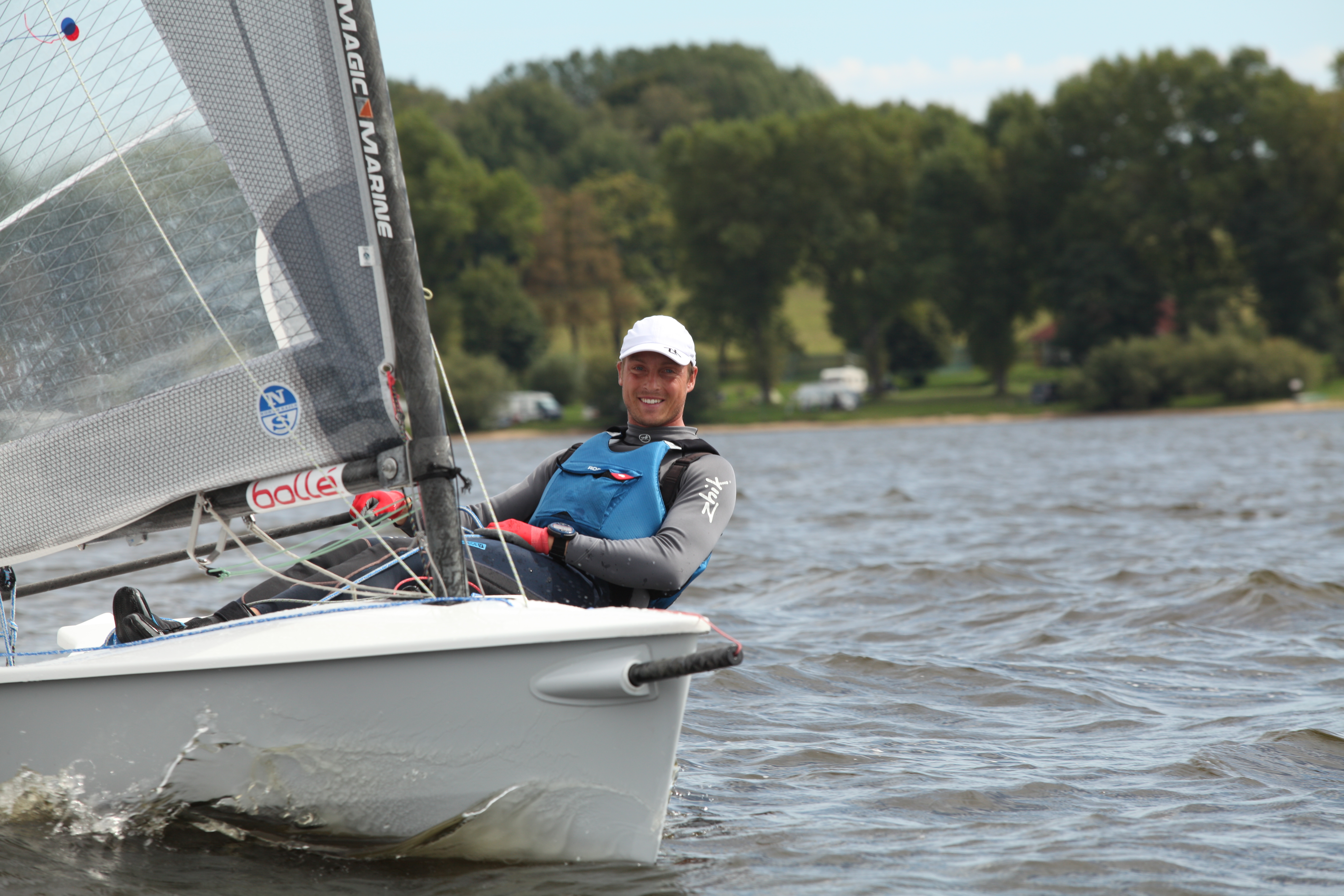 High pressure covered the continent, which gave us fine late summer weather but little expectation for wind. However the lake and surrounding geography decided to make its own wind for us giving good sailing conditions every afternoon. Conditions changed gradually through the event starting with 5 knots and 17 degrees c on the opening day to 10 to 20 knots on the final day with 25 degrees c.

The racing used just 3 buoys, giving us a windward mark and a gate that doubled as start/ finish with the race team in a rib suitably distanced from the line to judge things etc.

Race officer Martin Soysek had a telepathic ability to know when the wind would be in and stable, so we never waited for a start, courses were square despite 40 degree windshifts and we seemed to finish just as the wind disappeared for the day – incredible!

We were also able to complete a full schedule of 10 races over 4 days along with plenty of time each morning for fine tuning and postponement from the schedules 11am starts to fit in Soup (Polevka) before launching each day. The many varieties of soup gained a cult following by the end of the week!

Czech hospitality is quite something. Peter Benes and his team did us proud in addition to the soup with a full selection of evening meals included and bar tabs all round for the equally impressively priced Czech beer and yes for those who couldn’t make it, don’t worry Kofola remains on tap ready for our next visit. 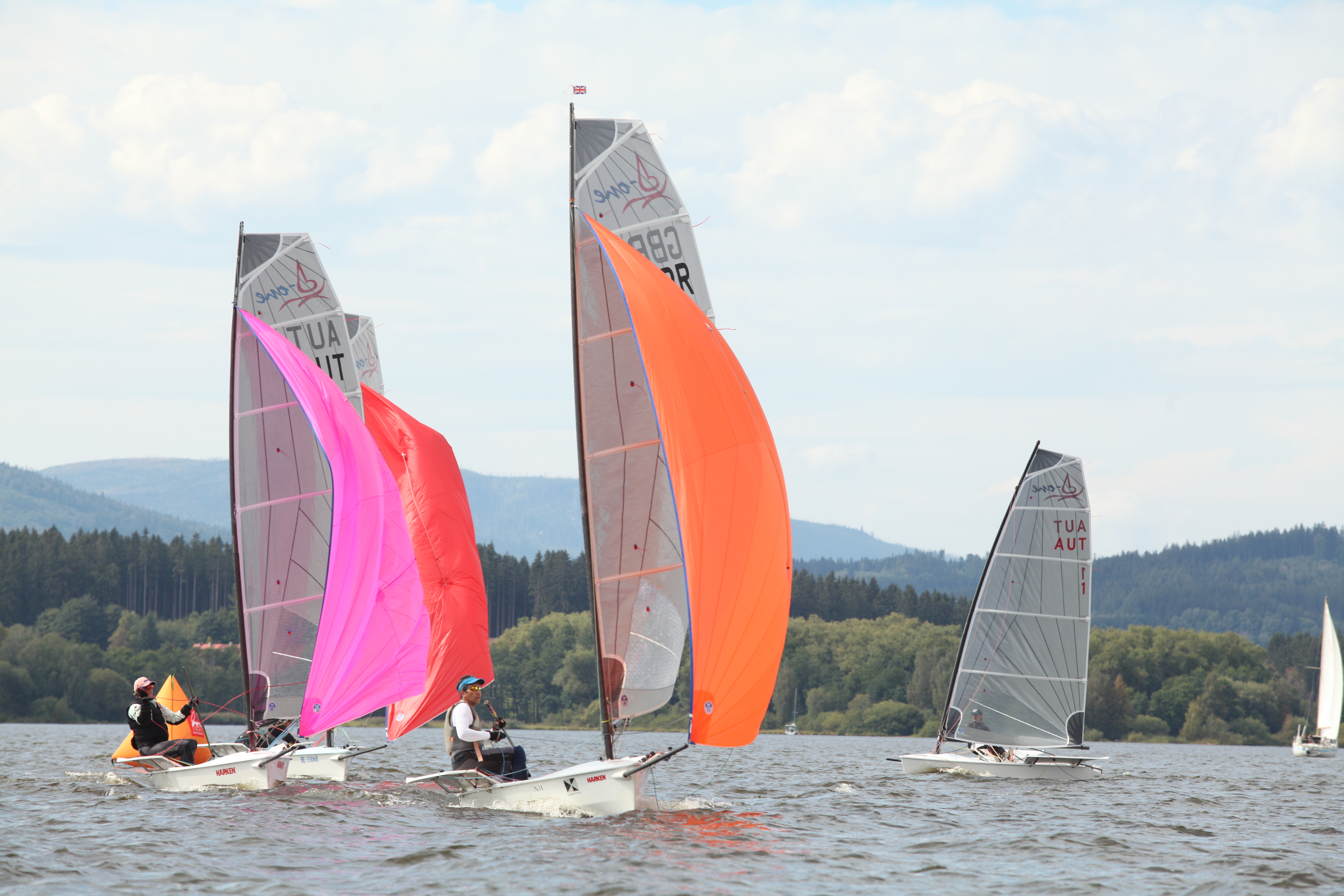 Top international coach Stefan Hess nailed the lightest and shiftiest race, but was very unlucky for the race to be abandoned on the penultimate leg. Vareo champ Nick Crickmore was third in the same race and enjoying being just ahead of Nick Craig who claimed to be happy as his main rivals were deeper in the pack.

Congratulations to Nick Craig on an impressive set of results to retain the trophy. The champion did say that runner up Viktor Teply was much closer that the score sheet suggested  with a number of Nicks wins being by the smallest of margins. First Master was Marek Bachtik from the host club.

At the back end of the fleet our other UK entry Nick Crickmore, following some top tuning tips on the judicious use of electrical tape from the champion, had a good tussle with perennial rival Patrick Rufenacht from Switzerland for the VWJ wooden spoon, never far apart in the daily standings and only decided on the last race.

There was a rather informal fleet meeting where we discussed potential future venues, as usual the D One fleet has an amazing set of international events in the pipeline with the worlds and Europeans in Palamos, Wolfgangsee and Sardinia in the next 18 months.

The fleet left just in time to miss the rain and no wind expected the day after the event, smiles all round looking forward to our next meeting.